Hi everyone! Did you know there is a musical version of Shrek? There is! And I’m going to review it for you today! I saw a smaller theatre production of Shrek the Musical so I wasn’t sure what to expect as I’d never heard of the musical or the college it was at (which at the time I assumed was the presenting group for it because it was held there but later realized it wasn’t – more on that in a bit!). A friend had found the musical and asked me to go with her as 1) she wanted to go to a musical and 2) we hadn’t seen each other in ages! So we used the day to catch up and see the musical! As I said, I had no idea that Shrek had been turned into a musical! I had, of course, seen the film by Dreamworks Animations and some of the sequel(s?). While I liked it, I’ve always been a hardcore Disney/Pixar fan and I don’t keep up with Dreamworks or other film companies nearly as closely. Clearly I need to fix that!

If you’ve seen Shrek you know the show is about an ogre named Shrek who just wants to live alone in his swamp. However, when Lord Farquaad orders all the fairytale creatures to move into the swamp, he ends up having to leave to go on a quest to rescue Princess Fiona from a tower guarded by a dragon with Donkey. I’ll avoid any major spoilers for the musical and the film in case you haven’t seen either.

Of course, the musical added new details along with the music. For example, we got to see a lovely opener of “Big Bright Beautiful World” that featured not only a young Shrek and young Fiona, but also their parents. There were more of a backstory not just the two main characters, but also Lord Farquaad. The interactions between the fairytale creatures were different as well. It was a ton of fun and hilarious throughout the performance. 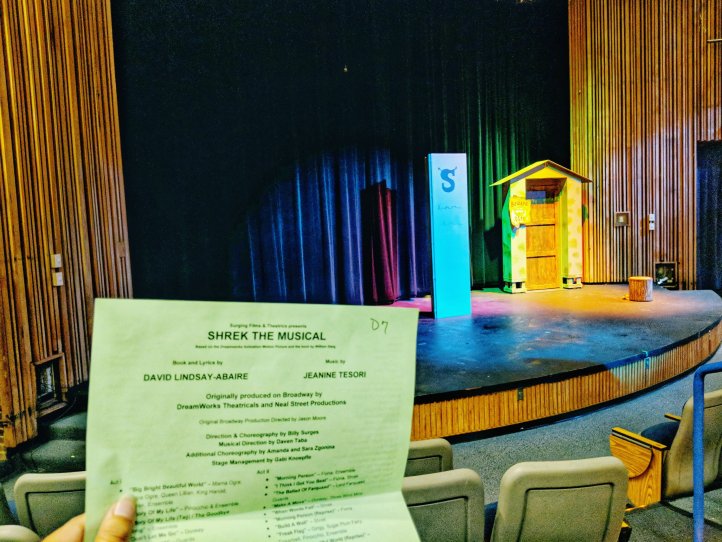 The music was an amazing addition! Of course the first thought when realizing a movie or work is going to be performed as a musical when it isn’t one already is always fun to imagine. Especially when the work was originally animated, which can make it a fun challenge for the theatre to reproduce. However the songs were incredibly fun and entertaining. I think my favorite was “I Know It’s Today” where young Fiona, Teen Fiona, and Fiona sing about their experience in each stage of their lives during their time in the tower. In the end, the production captured the silliness of the movie and added a whole new dimension to it. The story remains the same, it’s all about accepting yourself, growing and changing, as well as good always beats evil and expands on it. I liked it a lot!

As for the actors, they were great! Everyone loved Donkey of course. Most of the cast did perform several roles so it was fun picking them out in other scenes. Young Shrek later appeared as Teen Fiona but also as Grumpy the Dwarf. Queen Lillian (Fiona’s mom) became the Ugly Duckling and so on. Many of the actors had to adopt funny voices for their characters such as Pinocchio and Gingy. Overall everyone had great vocals but I was blown away but both Gingy and the Dragon! Gingy’s actor sang in her real singing voice for a bit towards the end which was nice as she’d been doing a sort of a high, nasal voice which fit the character but her real voice was amazing. The Dragon was a giant dragon head but the actor did walk around the stage separate from the dragon head which I thought was strange at first but her voice was phenomenal so I soon forgot all about it. Shrek’s actor was really great as were Donkey and Fiona of course!

There were a few funny moments because of the audience or mishaps. Shrek at one point threw something onto the stage but it bounced off towards the audience who caught it. At the end during the bows they handed the object back to Shrek who had clearly forgotten all about it, as had everyone else! There was also a moment where a kid in the left section was loudly calling out “DONKEY! DONKEY! DONKEY!” which would have been annoying had we paid more for our tickets but it was just mostly cute. Oh, and at one point Shrek roars at the audience and a kid in the second row in the center section actually shrieked because he got frightened for a moment but everyone laughed. #SorryNotSorry 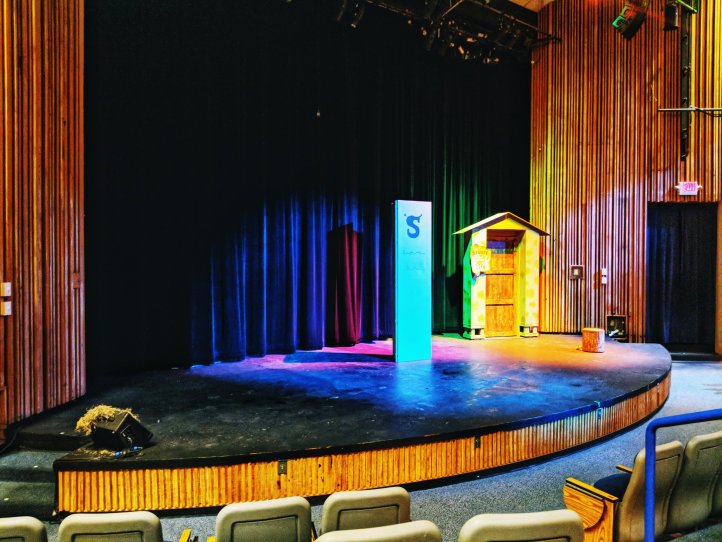 The costumes were fun to see too. It wasn’t a large budget for sure, nor had I expected one but some of the clothes I suspected either came from the actor’s own closets or were Halloween costumes. There were a lot of costumes that did match for the ensemble but for example I’m sure Fiona’s dress was from a thrift store maybe as it looked dated, the executioner put on what looked like costume Jedi robes over his all black outfit for the “wedding” scene, and all the fairytale creatures had costumes on as well. I’m pretty sure Fairy Godmother had a Cinderella dress on that she just folded over at the bottom to make it shorter. Gingy’s actor just had on all brown clothing but the puppet she held was likely bought or specially made. If any other costumes were specifically made and/or bought it was probably just the main characters. Fiona’s I suspect as three actors played her at different points in her life and yet the material on the dress for all three was the same. And Shrek had a mask on most of his face so that would also likely have been bought. It was fun to try and pick out these things during the production and we were only about four rows back in a small theatre so we got to see a lot of details!

Before the production one of the cast members did come out to tell everyone that some of the actors would be out later for pictures but warned that not everyone might be able to stay as some costumes were quite hot and they needed to cool down and rest before their next performance later that day (we were at the matinee). However, when we left it looked like nearly all the characters were coming out in costume for photos. My friend offered to take photos because when we caught up I told her about my blog and let her know I liked to review the musicals I go to! However I likely would have felt a little silly and plus all the kids were already crowding around. Looking back I would have at least liked to let the cast members know how great they were and such, but ah well! Hopefully the kids let them know for me!

So at first I assumed it was a school or children’s camp production either at Harper College in Palatine, Illinois where the theatre was or in the area that was renting out the space. However it is actually through Surging Films & Theatrics which is a local group. Their website says they consider themselves to be a midway point between community theatre/amateur film and larger productions. They are based in Chicago and I noticed the owner/founder of the group actually graduated from my college. How fun!

The theatre part of the group seems to be small, doing anywhere from 2-4 productions a year. Their site is pretty bare so it’s hard to tell if they’re always in Palatine or how to find more information on their coming shows (this was the second show they did this year and the third for 2018 is still listed as “TBD”) so I suppose I likely won’t actively seek them out but if I notice they do a show I want to see I’ll probably think about it! I do wish that they were easier to find or that they would maybe advertise their stuff more, as it was a lot of fun but there were very few people there. Hopefully they get more people in the audience in the future.

And that’s really all I have for you on Shrek the Musical! Let me know if you’ve been to see this one or if you even knew it existed. I’d love to know!