Hi everyone! Here’s the review of Pretty Woman the Musical that I promised last week!

I saw this musical in the second week of it’s world premier in the Oriental Theatre in Chicago. The musical is based on the 1990 movie Pretty Woman, which I have not seen (and yes, I’ve totally been judged by everyone!). Overall the musical has a 5 week run in Chicago before opening in New York in July and having an official Broadway opening in August. I got the tickets for March 24th for my mom’s early mother’s day present since she loves the movie and mentioned multiple times that she wanted to see this. I wouldn’t have picked it myself (more on this later) but if my mom wants to see a musical then we WILL see that musical.

This is an excellent time to state that I had purposefully picked the weekend after St. Patrick’s Day to avoid a crowded and crazy downtown. My first major panic attack had been on a train for St. Patrick’s Day weekend (I was going into the city for something else) and the train had been sooooo crowded, as had all the restaurants and everything. However the March for Our Lives (the gun control rally) had been planned for that very day. So I was not panicking yet but I wasn’t happy at the idea of facing crowds. Luckily for me, the Shamrock Shuffle had already gotten permits for Grant Park that entire weekend (it’s a large race that was taking place on Sunday but setting up on Saturday), so the march was moved to Union Park in the West Loop. Phew! The Loop was it’s usual nice quiet little place. 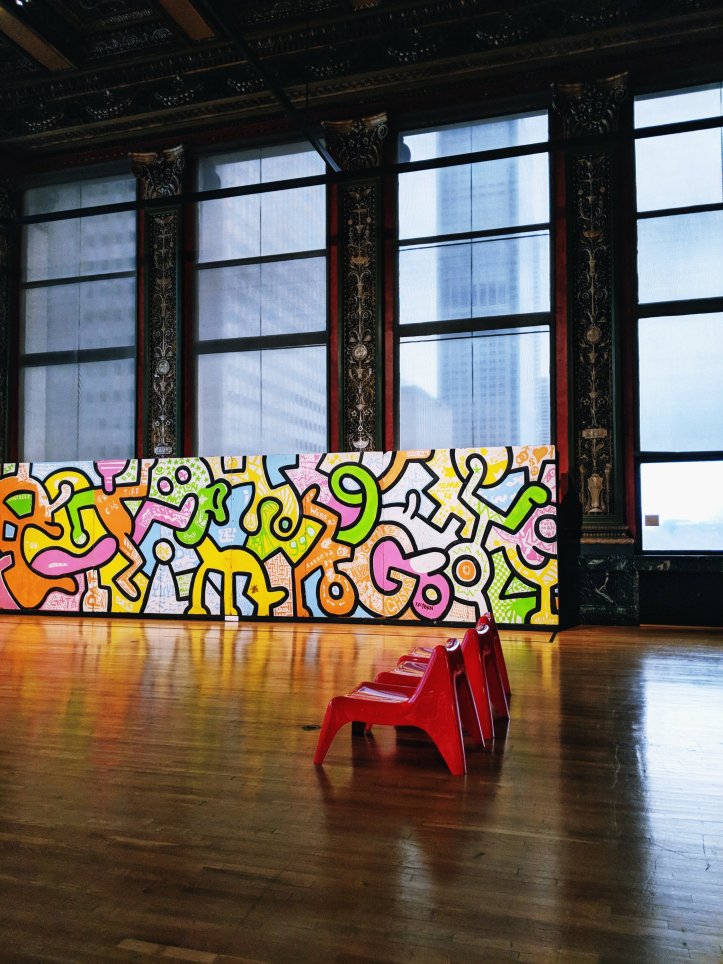 Onto how the day went before the musical! So originally it was meant to snow and rain all day but it ended up being really nice. My mom and I got a quick lunch in Starbucks before heading for a quick walk around Millennium Park. We then headed to the Chicago Cultural Center, which I love to visit before a musical, to see the Keith Harding mural on display. The Cultural Center is free to the public and has many art exhibits going on most of the time. I had heard about the mural on NPR a few days prior so I went to see it. The mural covered most of the room as it is large and it’s not even the entire mural. This is the first time it’s been displayed in Chicago since it was stored originally. The mural is important to Chicago as Harding had worked on it with many art students from around the city before his death and is considered a great gift to the city schools and students. 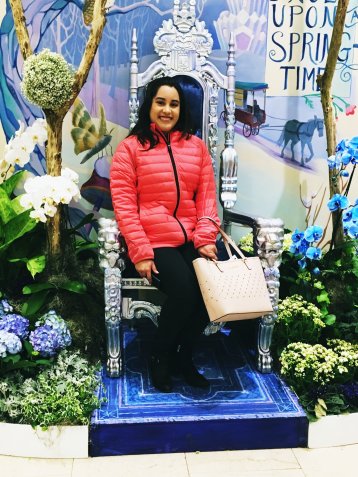 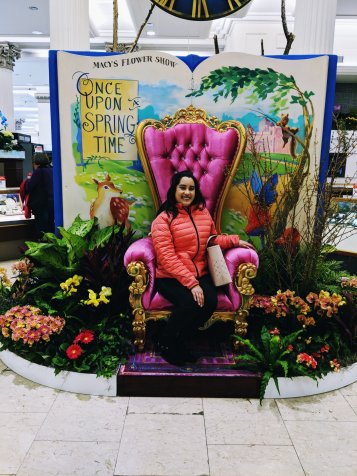 After that we walked into Macy’s and found that they were setting up a garden show that was meant to start the next day. So it was photoshoot time! But here’s my favorite photo that I took there. 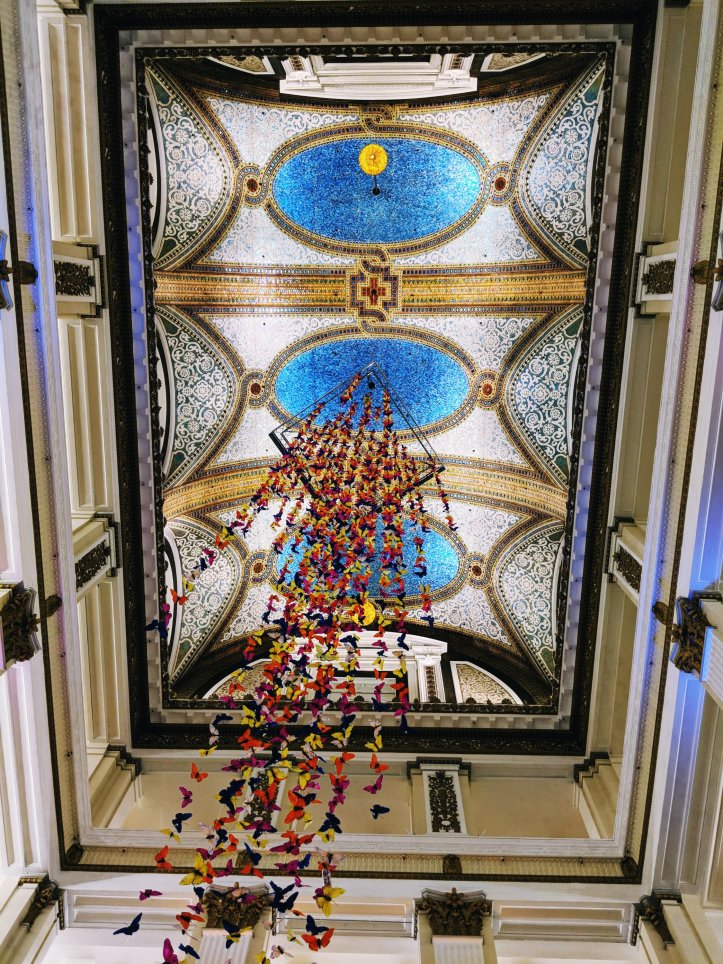 This was just so pretty to see! The theme was “Once Upon a Springtime” and it looked great! 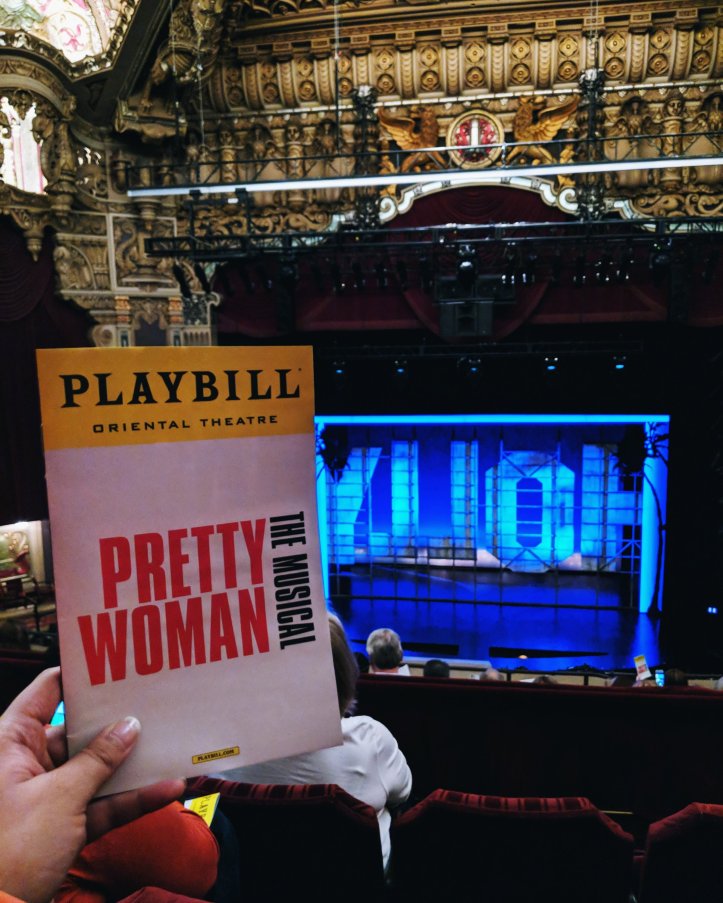 So after that we headed over to the theatre. Our seats were center balcony. I really like that spot and it worked well for this show too (except for the usual tall person who can’t sit still and has a giant head that HAS to sit in front of me).

If you don’t know the story, a prostitute in Hollywood named Vivian meets wealthy Edward who hires her for the week to accompany him as he is in town for business. Throughout the week they get to know each other and form a close relationship.

The word that kept coming to mind as I watched the musical unfold was “charming”. I thought that word about nearly everything. The story, the characters, the music. Vivian was constantly judged by everyone because of her profession but ultimately won them over with her charm. The scenes were beautifully staged and I loved the costumes that were used.

The way the characters interacted was beautiful. I loved the actors on the stage and felt they suited their roles perfectly. Of course, Samantha Barks, who played Vivian, was phenomenal. Steve Kazee was Edward and I thought he worked perfectly with Samantha. Mr. Thompson/Happy Man was played by Eric Anderson and I loved the acting there. He had to switch between the two characters throughout the story, and a few times on stage which was amazing to see.

Since I know not a lot of people have gotten the chance to see the musical I don’t want to spoil any of it but I believe most people know the story. I thought the scenes at the stores on Rodeo Drive were great as was the scene where Vivian realizes that she can’t go back to the life she used to live before Edward. The scenes where Vivian and Edward have time alone and get to know each other and their stories were also really sweet. Ultimately, Vivian’s straightforward, resilient, and idealistic attitude made her my favorite.

My favorite songs “You and I” sung by Edward and the company and “I Can’t Go Back” sung by Vivian. Both occur in the second act although all the music is great. In fact, I loved the story with it so much that I’m confused how the story works without it! My mom did say she wasn’t sure how the story was going to work with music going into it as it’s not a musical movie (a co-worker said the same thing to me as well) so I guess the story is just that good! The music was so varied throughout the story. There was a bit of opera, ballads, and more.

While it’s not a musical I would have chosen to see on my own (and I see a lot of musicals on my own) I am so happy I was able to see it. As I said, it was absolutely charming and a great way to brighten the early spring season. I would say if you like romance movies, especially Pretty Woman, want something light and fun to watch, or looking for something that multiple people in your group will enjoy then this is a great musical to see if you get the chance.

Onto the rest of the day! So earlier in the day I’d texted my sister saying if she wanted to meet up after the musical (she works in a museum near the Loop) that we could stay a bit longer. Once we left the theatre I texted her to see if she had stayed in the area (as she got off work about an hour before we got out of the show) and she said she had so she met us at Daley Plaza. We then decided that we were going to stay downtown to grab dinner with my sister. 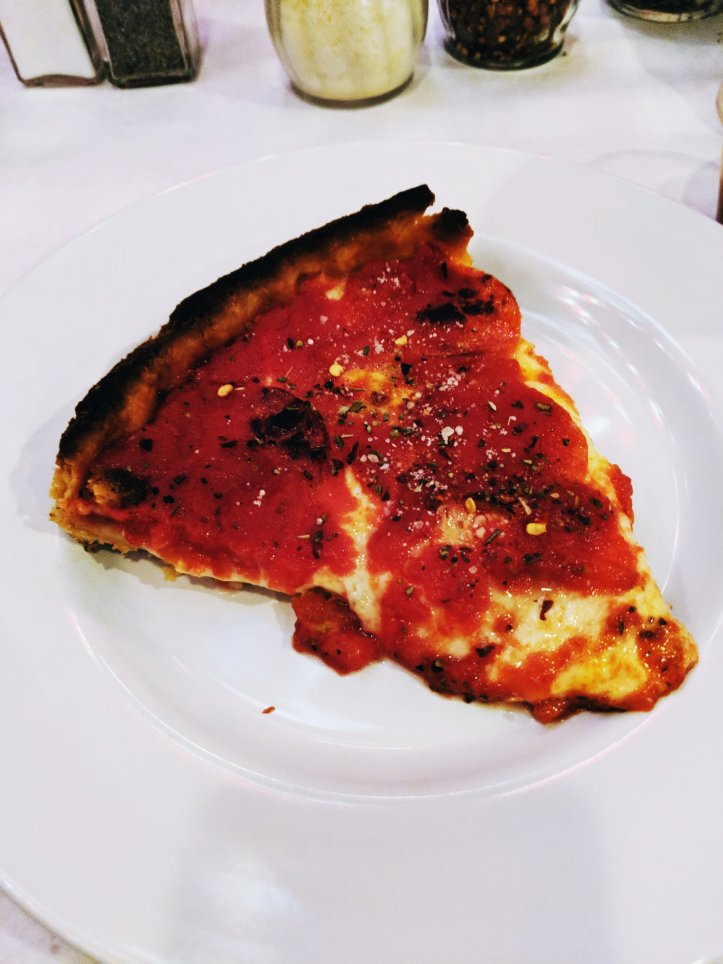 We went to Pizano’s and had their deep dish pepperoni pizza! We don’t often eat downtown besides at places like Starbucks or Panera but we’d spotted this place last time we were there so we had this place in mind anyway. We were seated downstairs in the Banquet room as the place was absolutely packed and the pizza took about 30 minutes (faster than the estimated 45) so we had cheesy garlic bread for appetizers. There was also the Loyola game that day on the tv and my sister made fun of me for picking Virginia to win in my bracket. We didn’t finish the entire pizza as the slices were huge but it was so delicious! The service was amazing as well, I really liked our server who was so nice throughout the entire meal so I did leave him a good tip. We let my sister take the rest (two more slices) and she headed home while we went to Target as our train home wasn’t leaving for another hour and a half.

At Target we grabbed a few items, and I tried to remember what I needed for my trip to Houston to try and get some shopping done early. Turns out I forgot a ton of things but there’s still time to get stuff. There were a ton of problems trying to check out but eventually everything got fixed and we headed out to catch our train. Oh! I did finally get a new Cubs shirt as the only one that I had was grey and white, which are more like Sox colors. I also got a beauty box at the store and will share what’s in it on Thursday!

So that’s the day and my thoughts on Pretty Woman. I really enjoyed the trip downtown and the musical so it all worked out for me. Plus I got some sister time!

And before we close out this post I did want to add that I’m changing my schedule a bit. I will be posting three times a week in April. I plan to have an entertainment or tag post on Tuesdays, a beauty or style post on Thursdays, and a random post on Saturdays. I feel like I’ll be able to create better content overall as well as not cause so much stress to myself trying to get posts done while working onsite for a week and trying to get school stuff done.