Hi everyone! I saw another musical over the weekend and thought I’d review it for you. I had the most wonderful time watching Something Rotten!

If you’ve followed me for a bit you know I love musicals and I’m a season subscriber to Broadway in Chicago.

The second musical in my subscription this season was Something Rotten. The plot follows two brothers who are annoyed at the attention Shakespeare receives for his plays while they get none. Eventually they start working on a musical production although they’re not sure who on earth is going to watch people sing and dance on stage!

This musical is hilarious. While everyone is fawning over the playwright the Bottom brothers Nick (Rob McClure) and Nigel (Josh Grisetti) are trying to come up with a new, great idea to get noticed. Nick is the older and more dramatic of the brothers while Nigel is the romantic poet. They work as a team on their productions but often are overshadowed by Shakespeare and have to compete with him to gain patrons.

Nick’s wife, Bea (Maggie Lakis), is a woman ahead of her times, she wants to help provide for her family as Nick and Nigel work to create their musical. In “Right Hand Man” she insists that she will get a job and pretty much doesn’t let Nick get a word in before she rushes out to find one so they don’t have to dip into their savings to get by. Fun fact I learned from the Playbill, Lakis is actually married to McClure! Cute!

The Puritan leader’s daughter, Portia (Autumn Hurlbert), serves as Nigel’s love interest. She is also rebellious and stubborn in her own right. Despite the fact that she is not supposed to read poetry she does and she sneaks out to see Nigel and encourages his work. She is very optimistic and headstrong.

The soothsayer, Nostradamus (Blake Hammond) is possibly my favorite character after Nick in the musical. Nick empties the family’s life savings to pay the soothsayer to learn what the theatre looks like in the future and to see what Shakespeare’s greatest hit will be. It is through the soothsayer that the idea of the musical comes through although the hit idea is not quite clear as he muddles all the famous musicals together creating a charming and hilarious medley of song and dance.

And William Shakespeare himself (Adam Pascal), the Bottom Brother’s biggest obstacle, pretty much looks and acts like a rock star. He’s treated like one as well. It’s revealed he steals a lot, if not all, his ideas from other writers and disguises himself to try and find out what the Bottoms are working on. He also loves to quote himself. While Nick hates him, Nigel admires him and the two brothers clash over this on occasion. Will and Nick have known each other for some time so it makes Nick’s annoyance much more justified and personal. 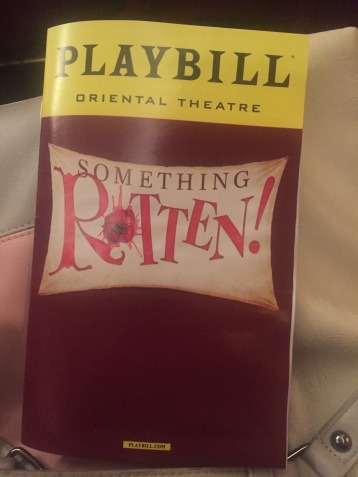 The music itself borrows for many musicals. References are made outright with not just music but staging, costuming, and even character names to Les Miserables, Evita, The Sound of Music, The Lion King, Chorus Line, The Fiddler on the Roof, and many more. Even more are referenced indirectly but a musical line or two are used such as Wicked, Sweet Charity, Chicago, West Side Story, Annie, and more. The best example of this is the song “A Musical” but the motifs can be heard throughout the production.

The dancing was really fun as well. While “Welcome to the Renaissance” was filled with dancing that is inspired by the era, there is also inspiration from other musicals, particularly when that musical is being referenced in the song. Nick and Will get a great tap dance battle.

Likewise, we hear lines and references from Shakespeare plays such as Hamlet, Midsummer’s Night Dream, Romeo and Juliet, Macbeth, and so many more. Usually they come from Nigel, followed by Will saying that he likes the sound of the line.

Since the story takes place in the renaissance era the costumes and set are period themed. The costumes are of course bedazzled and exaggerated but perfect for the production. The set main building opens and closes to reveal the theatre and the rest is mostly backdrops or moveable walls but very detailed as well.

Overall this musical is very much meant to be a great time to theatre fans everywhere, although a non-theatre person accompanying the theatre fan would get a good laugh too. It really is a lot of fun and the audience had a lot to laugh about! The musical really did a great job capturing the magic of musicals as a whole while hilariously critiquing the audience for their choice of entertainment. This production is definitely a must see and worth the trip!

So there you have it! My Something Rotten! musical review! Let me know if you’ve seen this one or if you plan to.