Hi everyone! Crazy to think we’re in June already, isn’t it? I feel like the first half of the year has gone by really quickly. I can’t believe it!

I think it’s helped that I’ve had many cool things in the past few months. There’s been so much going on! But we’re here to talk all about how awesome May was in terms of events in the month, and I have quite a bit of fun stuff to talk about! 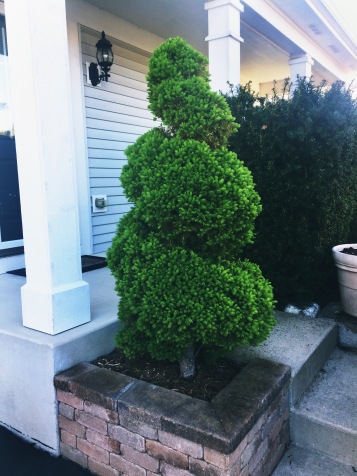 So first thing we noticed this month was that there was a bird that constantly flew out of a tree by the front door when we came home or left. We soon realized that it was a mama bird trying to distract us from her nest! She would fly away chirping loudly so that we’d follow her and not find her nest. Her babies did hatch (although at least one didn’t) and they actually have already left the nest! I don’t have a photo of them after they hatched because it was just a dark lump of feathers that moved up and down but I’m sure their faces were adorbs.

In case you missed it, it was my birthday last month! I arrived at work on my birthday and came to a beautifully decorated desk (you may have seen this in my presents post). Last year my teammates decorated so I didn’t think it would happen again, but it did! I loved it and a lot of the pink streamers are actually still up. I just don’t want to take them down! 🙂

Oh, this happened! So at work I help youth sports teams find housing for tournaments they’re attending. I won’t say more than that since I want to keep my full time job a little private, just to make sure I don’t get in trouble or anything at work. I’m sure it would be fine and I’d never say anything bad about it (because there isn’t really anything to say, it’s a great place to work!) but I do want to keep it separate. If you’re really curious you could find it quite easily, I don’t really go out of my way to hide it on other social media even if I don’t promote it.

Back to the point. There was team I helped earlier in the year that honestly was a bit of work to try to find a hotel that would work for them. They had multiple teams, going to multiple tournaments, and three of them really needed to stay at one hotel for two weeks. I found a place and the team coach sent me two bottles of wine! He had said he would and asked for my address (I provided my work address) but I hadn’t really expected it. I mean, it’s my job of course, plus even though I did go out of my way to find something I didn’t think it would actually happen. But he followed through and I got a lovely delivery! I sent them back a little thank you note. I’d never gotten a present from a team so it was so nice to receive! 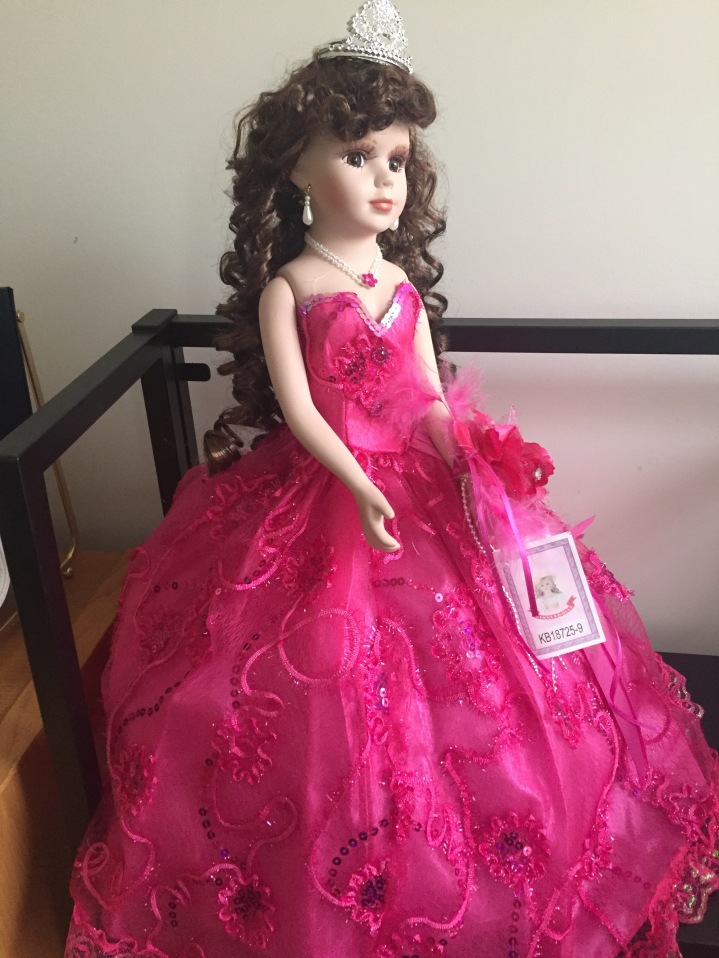 At the end of April my parents went down to Georgia for a cousin’s quince (my family is Mexican) and this was one of the centerpieces! My mom handed here to me and said “you can take pictures of her for your blog!” so I did that, here they are. Also then I just kept her because she’s adorable! My mom apparently wanted her back but nope, she’s just to pretty to give back! I do wish I’d been able to go. I haven’t met many people from my dad’s side of the family. Without going into such a long story, his parents split up after he was born and so he didn’t have much contact with either side but is now getting to know his half siblings on both sides. I know it meant a lot for him to be invited and if I hadn’t already had tickets to see a musical already or signed up for the 5k I did last month I totally would have gone too. Ah well, maybe next time! 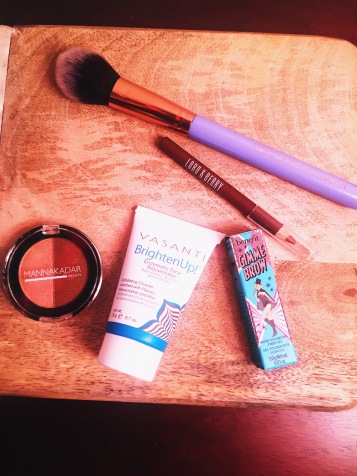 And another lovely present, I received an Ipsy bag! Valerie from Living Lighter in Atlanta (happy belated birthday Valerie!) ordered and Ipsy bag, but she didn’t want it after she ordered it. I am so honored that she would think of sending it to me! It’s so cute and she included the most lovely note with it as well. She is just so amazing and inspirational, and her family is just beautiful. Thank you so much Valerie! 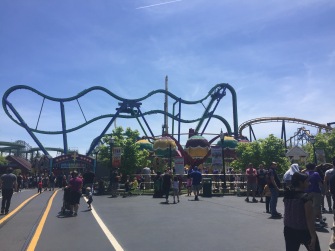 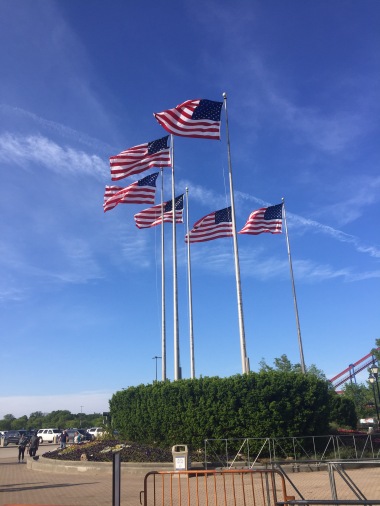 On the last weekend of May I went to Six Flags Great America with my mom and sister. If you missed it, I did a day in the life post on it, and everyone seemed to enjoy the day as much as I did! We rode quite a few coasters and I got to ride the new one, the Joker! It was a great day for sure!

So we had two more birthdays we decorated for at the office! I didn’t get a photo of the other one but here’s the one we went crazy with. So my coworker (his name is John) specifically said to NOT decorate his desk which meant that we were free to cover every inch with aluminum foil and streamers. I braided the ones going to the pole in the middle and helpede with the doorway. It took about an hour with five of us working on this. (Not on company time!) I honestly love working with the people on my team, we’re all really close (there’s one new person and we’re getting to know her quickly). At work we’re the newest department and growing fast, but we’re known as the fun team! I would agree with that. We joke around a lot and have fun with each other. Hence the desks! After Memorial Day we were all talking and laughing when we arrived in the morning and when someone walked by one of my teammates said “we haven’t seen each other in like 5 days! We missed each other!” and that was 100% true! 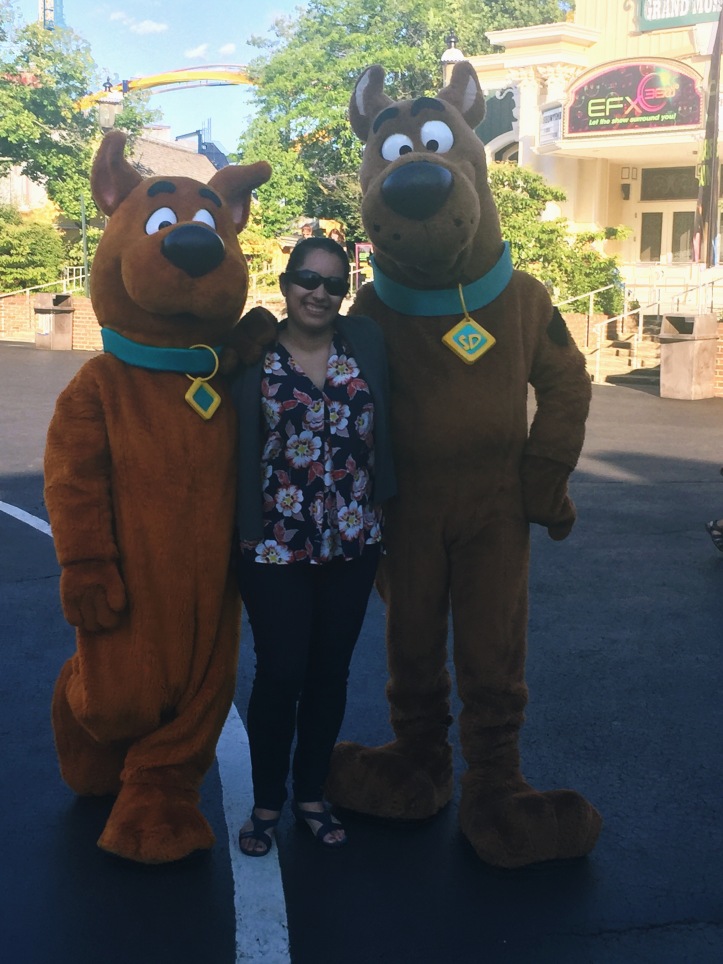 Then I went to Six Flags again! My sister works at the same company I do but she’s in a different department and is currently part time. She hasn’t been working Wednesdays and so I had joked that she and my mom should go to Six Flags so she could ride the Joker (she didn’t get to the weekend before) and I said I’d join them after work. They actually did go and after I ran a few quick errands I headed over to join them! I used the alternate entrance and no one asked for my pass to get to the parking lot so I went right in. I actually have free parking so it wasn’t a big deal but I thought it was funny. We each have season passes and dining passes as well. When I arrived I got dinner real quick, we rode a few rides, and ran in to catch a music show. It was an electronic music show with lasers and lights and stuff. It wasn’t quite my thing but still fun to see. When we got out, a few characters were around. I got to take a photo with Scooby Doo and Scrappy Doo! Then we rode the Joker and then the park closed so we headed out of the park.

Note to self, take a change of shoes if you’re going to Six Flags after work. Calvin Klein sandals are cute but not that comfy!

And that’s the most exciting bits of the month! Well I left off BirthMay as I already talked about that in previous posts but other than that here’s everything! What’s been going on with you lately?