Hey everyone! It’s time to wrap up the first month of the year! For me, January has been pretty quiet. Here’s a bit of what I was up to this month. 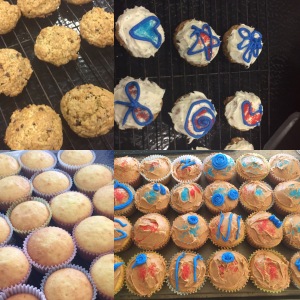 Early this month I started to become quite the baker. I made chocolate chip cookies with cream cheese frosting for New Years, and lemon cupcakes with caramel frosting for fun. Although the cookies probably didn’t need to be decorated it was still a lot of fun and I really like it so far. I only use the mixes that come in boxes from Target but maybe this year I might try to venture into trying to make treats from scratch and making them a little healthier. We’ll see!

I did get some bad news this month as well. If you don’t already know, I work for my dad’s landscape company. The company isn’t either of our full time jobs, it’s something that we do on weekends. Because we live in northern Illinois we don’t have any work at the moment and we stored away the company truck and trailer until work resumes. Unfortunately, the trailer was broken into. Luckily we didn’t keep anything in the trailer so nothing was stolen but it was still inconvenient and insulting. The truck and trailer are now living in a safer place with 24/7 cameras and other great amenities. Hopefully all goes well this time.

More bad news this month, I did not win the Powerball. Le sigh! It wasn’t overly surprising of course, the odds were 1 in 292.2 million for the jackpot of $1.6 billion. Still, it was my first time playing the lottery and it was fun! Everyone at the office (of my full time job) seemed to be playing and it was nice to hear how everyone planned to spend their not-yet-won billions. What would I have done with my winnings, had I won? Probably buy sports cars and tons of books and make up and maybe pay off my student loans if there was anything left over! 😀 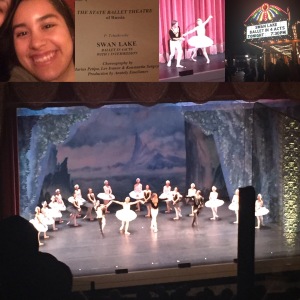 And lastly, the highlight of my month, Swan Lake! My mom and I went to see the ballet at a small theater in a nearby town. The last time I had seen this ballet was four years ago in Barcelona when I had a box seat. Luckily this time I was a lot closer to the middle of the stage so I feel like I got to see a better angle of the ballet. The dancing was beautiful and it was a great performance. The venue was also amazing as were the theater employees. From what my mom said, the theater had been renovated in the recent years and it really showed. Everything was beautiful and clean.

However, there were some negatives in this performance. The audience was not the best audience out there. Perhaps because this venue isn’t in downtown Chicago or Milwaukee but I felt that the audience really misbehaved a lot. People pulled out their phones not just in between acts, but also during the performance. One person at the very top of the balcony didn’t event bother to turn off the flash on their phone. One person at the front of the mezzanine took a million pictures, particularly in act 4. I did pull out my phone to get a quick picture of the cast at curtain call but I would never pull out my phone during the performance itself. The other negative was the sound. The sound was terrible for a good part of the ballet. There was an enormous amount of feedback during the lower range pieces and while the sound did get better after intermission it was still very distracting when it did occur.

I will note that although they were two big negatives, they were not necessarily the fault of the performance. You never know what you’ll get for an audience, I’ve been in performances where there has been a quiet and respectful audience, others where people have brought in their very young and unruly children who are just not ready for a 3 hour event, and so on. As for the sound, I don’t know enough about sound systems to be able to say for sure but something was definitely not working right.

And that was my January! Thanks so much to everyone who’s read and enjoyed even one post on my blog. I started late November and this month I got my first few followers, comments, and likes! This means a lot to me and I’m excited to see where we go on from here. Please check back next Wednesday for my next post!