I did it! I blogged all of December! Well, I missed one week, but overall we’re off to a great start! Here’s some of what I did in December.

Paige and I! Yes, I did get her permission to use this picture.

For work I went on two outings. The first, for the Housing Department Outing, we volunteered at the Feed My Starving Children Libertyville location. There we packed food into bags that will be delivered to children who live in impoverished areas and that don’t have access to food. We helped feed 100 children for a year! Afterwards we did go out for food ourselves. The following week we had our company wide Holiday Party at a local restaurant, Cafe Pyrenees. I’m on the social committee at work so I helped put that together and we had a white elephant gift exchange, baskets of goodies that we raffled off, and some pretty tasty food. 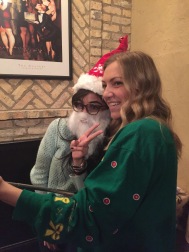 Diana in the beard, Paige in the green

Celena and her baby boy, Jeremy

The handsome baby Jeremy and I!

We had the option to bring a guest to the holiday party so I brought my little sister! She and I had a great time with my friends who are pictured above. (Left to right: Myself and my sister, Diana and Paige, Celena and Baby Jeremy, Myself and Baby Jeremy) 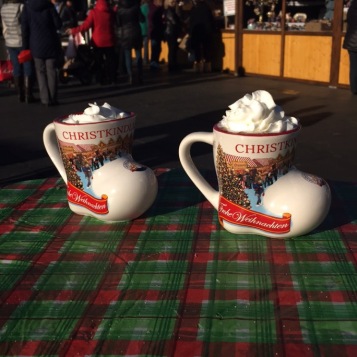 My sister and I also took trips out to the Oakbrook and Daley Plaza Christkindlmarkets (on separate days). I talked a bit about our trips here . We had a great time, as always enjoying the Christmas decorations, buying a few presents, sipping hot chocolate from the boot shaped mugs, etc. Oh, and WE SAW SANTA!

After our trip to the Oakbrook Christmas market we went to the annual Christmas service at Elmhurst College, my alma mater. Lessons and Carols was beautiful, the chapel was well decorated, and the choirs were absolutely lovely. I loved seeing my little campus again. 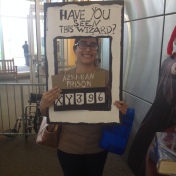 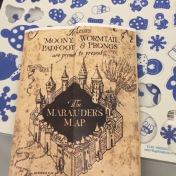 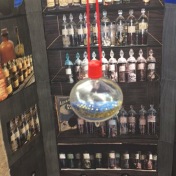 One of the best events I’ve ever seen occurred at my local public library. The Zion-Benton Public Library hosted “Christmas at Hogwarts“! I got sorted into Gryffindor (picked a red-striped candy cane from a hat. boo I’m a Ravenclaw!), attended divination (decorated a stocking), made a potion (glitter was put into a clear ornament), beat a little kid at Quidditch (take that sucker! jk, I felt bad), and did not win the Harry Potter prizes in the drawing (boooooo). But my sister and I did correct one of the scavenger hunt quiz answers that the headmistress (volunteer from the local high school) had been provided. Neville was born on July 30th, Harry on July 31st. Duh! 🙂 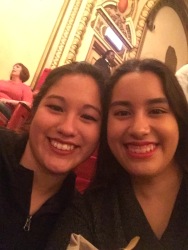 My sister and I also attended a production of Disney’s The Lion King at the Cadillac Palace Theatre by Broadway in Chicago. This show was pretty much sold out when I picked seats in November but I managed to get my sister and I seats pretty close to each other up in the balcony. I wish I had gotten us floor seats though, the production had a giant elephant that came up from one of the aisles so we didn’t see it until it was almost onstage already and were really confused when everyone got excited when it entered. There were also a some giraffes during “I can’t wait to be king” that leaned their heads and long necks into the audience from the stage, so their heads were cut off from view when they leaned forward. Overall, not too bad and I would sit in the balcony again for another show. The costumes were gorgeous and Nala was by far my favorite character (same as the movie) although Scar was a close second.

There was one huge negative but it was not in anyway the fault of the show or venue. I had the terrible luck of sitting behind a little girl who was about six maybe. She clearly did not want to be there and decided at various points of the first act to lift her stuffed bunny high into the air… At my eye level. Effectively blocking my view several times. Luckily her mom realized what she was doing after awhile and she snatched her kid’s bunny out of her hand. Even so, the child continued to “whisper” to her mom and move all over her seat, and even tried to sing along to a song at one point. I love that she’s getting exposed to culture and all, but she was very, very distracting during the show.

Oh, there was also two people in the row with my sister who immediately told her that she was in the wrong seat as soon as she sat down fifteen minutes before the show was going to start. I was two rows down and had to keep getting up to let people through so I only caught the end of the conversation but apparently it took my sister pulling out her ticket and showing them the seat she had for them to believe that she had indeed sat in the correct seat. They just miscounted the number of seats that they had “blocked off” for their party (despite having assigned seats on their tickets as well and being warned to sit in the right seat because the house was sold out). She was much kinder to them than I would have been because their tone was quite rude and snippy. Even after the matter had been settled I could hear them muttering to themselves about what seats were actually theirs. So basically the only negative was the people attending the show I suppose!

And my last and possibly most exciting adventure of the month – my new car! I got a little 2010 Toyota Corolla this month. He (yes, the car is a he) is all black and I love his a lot already. I like to name my cars and I put a lot more brain power into this than I care to admit. His name is Bruce, but only from 6am to 6pm. What is his name for the other 12hours? Batman! Get it??

So that was my December! I had an absolutely fab end of my year and I am so excited for 2016! Happy new year my friends!

Disclaimer: I am not being paid to promote, nor was I asked to promote, any organization, event, or item in this post, I am talking about these things because they happened in this month and I enjoyed them.